“We usually pass,” says Vinny Dotolo, one half of restaurateur duo Jon and Vinny.

But with their help, Delta Air Lines is doing everything it can to alter their customers’ perception of in-flight dining. Delta’s the latest in a shortlist of airlines that have overhauled their menus and elevated their cuisine. Some, like Austrian Air, even include an onboard chef, complete with a toque blanche. Jon and Vinny aren’t ready to commit to that level of service—they have a Los Angeles restaurant empire to run, after all, that includes perennial LA favorite, Animal, and collaborations with Ludo Lefebvre like Trois Mec. But, they’re curating the menus on Delta’s business-class (called Delta One) routes between LAX and JFK, as well as LAX and Sydney, and planning expansions to routes from LAX to Paris, Amsterdam, Tokyo, and Shanghai.

As they drove down La Brea Blvd., phone cutting in and out, they told me of the perils of cooking for hundreds of people trapped 35,000 feet in the sky.

Peril 1: The Quality of Ingredients

When asked why airline food usually tastes like garbage, Jon Shook immediately had an answer: “Most traditional airplane food is just a very low-quality product, which naturally leads to it not tasting that great.” Airline caterers will typically purchase the lowest quality proteins, but they also fall prey to the usual trickery of most mass-market grocers who don’t supply fresh produce, but fresh-appearing produce.

For instance, let’s examine the freshness of a typical tomato. Mass-market tomatoes are typically still green when snatched from the vine. They’re rushed into warehouses and sprayed with ethylene gas. Et voila, those once-upon-a-time green things are now red. It’s not painted of course, but science: several varieties of fruit, tomatoes included, naturally emit ethylene, which acts as an aging hormone. When doused with it, tomatoes can’t help but be dragged prematurely through puberty. And like any overgrown man-child, their lack of maturity affects their quality.

But Jon and Vinny won’t stand for inferior ingredients and have instead treated their airline dishes as they would any in their restaurants. “We’re literally going to the Santa Monica Farmer’s Market and buying the best produce you can possibly buy and putting it on airplanes,” says Jon. “That is totally new. That’s something Delta has really taken the forefront on.” 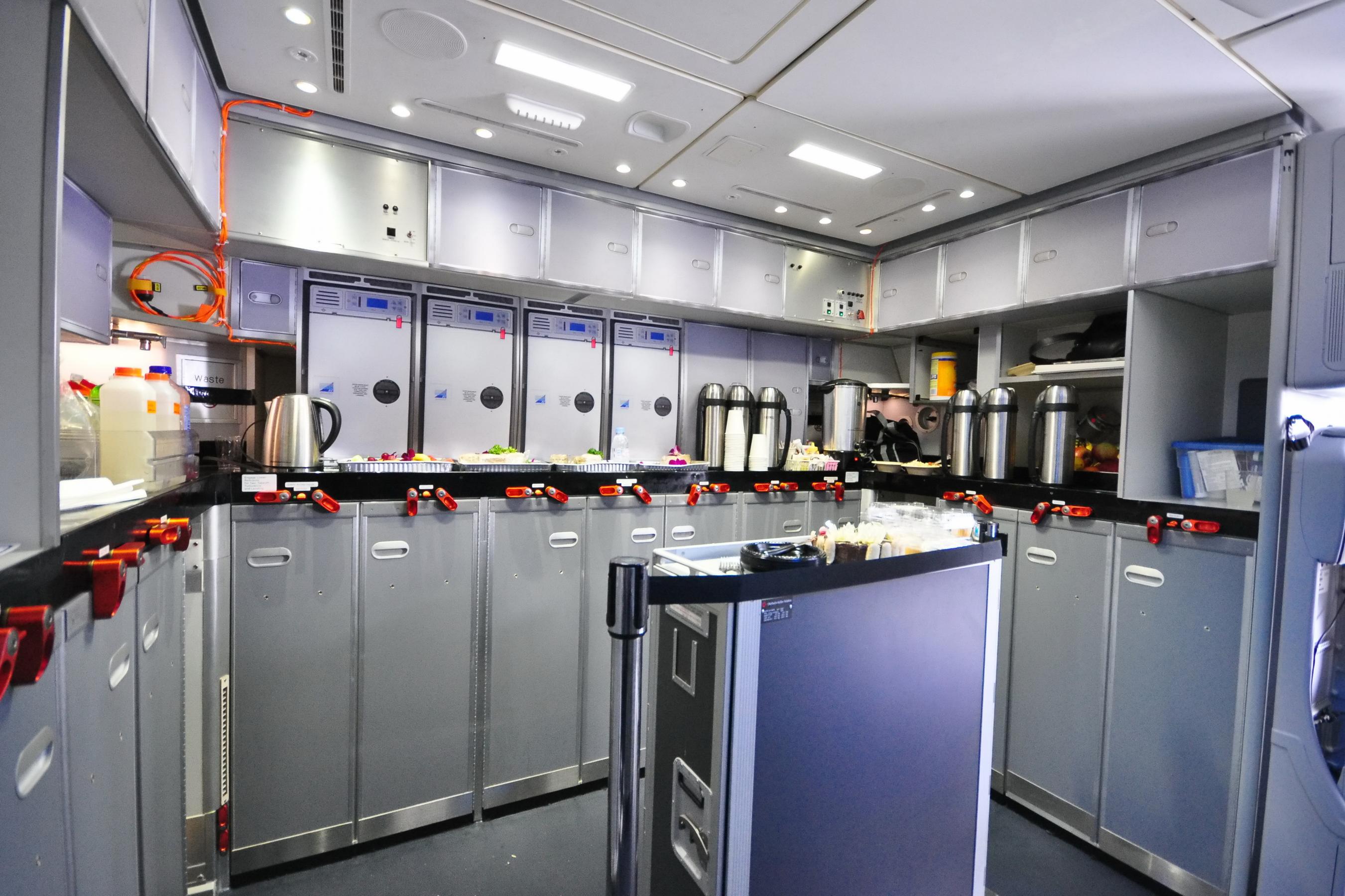 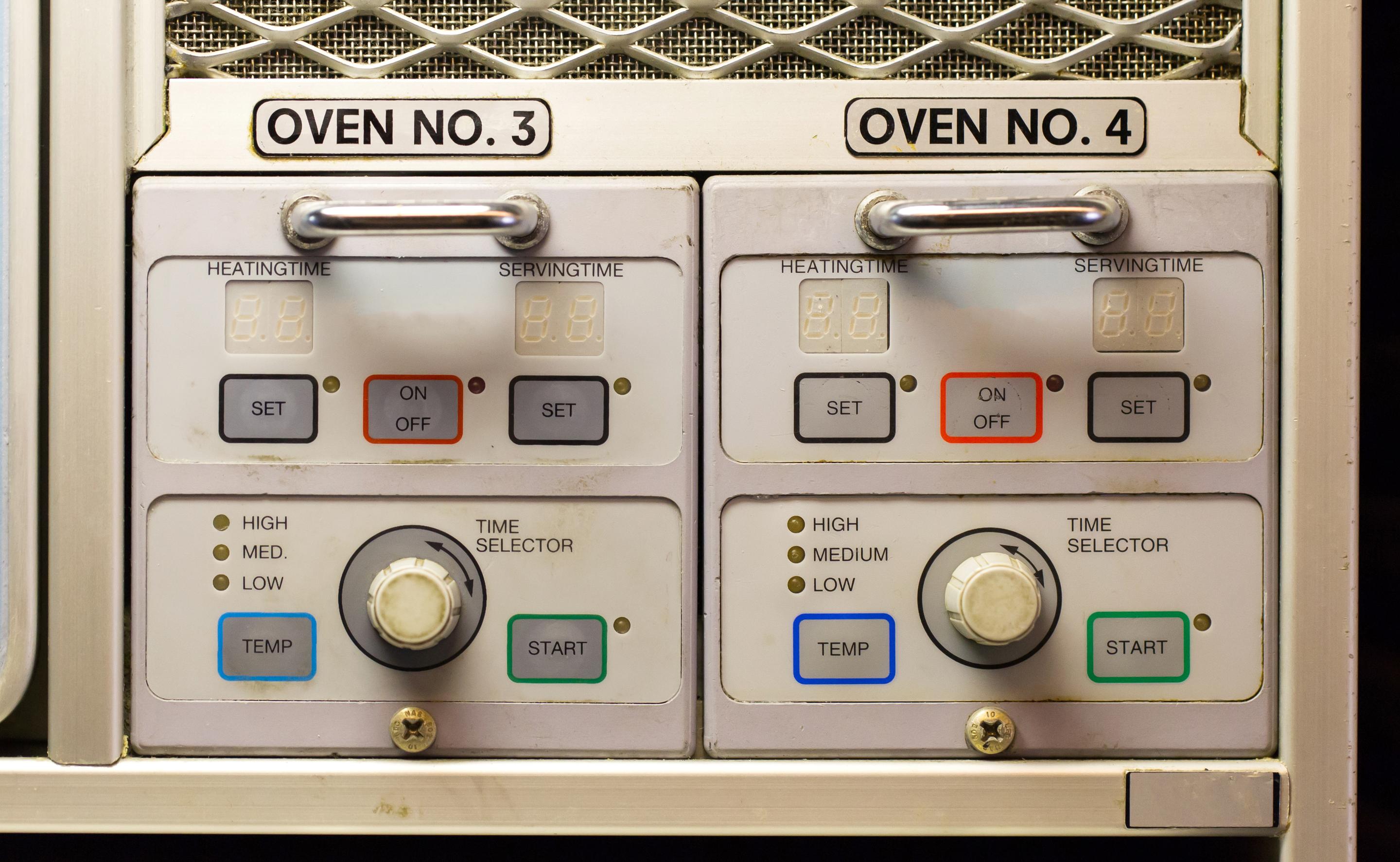 The interior height of a professional kitchen oven can vary, but something like a Wolf M-series is 17.5 inches. The interior of a standard home oven is a bit smaller, about 16 inches. Meanwhile, the interior of a plane oven is a little more than 2 inches. Which, of course, means that chefs can forget a filet or a lasagna or a cake, food must be compact to fit. All food. Always. Even a pointless garnish, like parsley, must be able to stand atop a chicken breast and clock in at under two inches. Two inches—that’s what you’re working with, folks.

To make matters worse, the ovens are not standard but convection, which use fans to blow heat around the food, allowing for faster cooking than conventional ovens, where the heat rises and surrounds the food. This is ideal for even cooking, but can leave the middle lukewarm, therefore they’re best used for cakes and roasted meats which, of course, are two items that are often over 2-inches tall. The only way to overcome this is to get creative.

As told by Jon Shook, the dreaded process for cooking plane food requires a lot of steps: “You have to make the product, cook it all the way, cool it, pack it, deliver it, get it on the plane and have a flight attendant re-heat it up, and plate it based on what’s called a map, which [are] general directions that [are printed out] for the flight attendant for that specific dish for that flight.”

There’s a lot that can go wrong along the way and several tasty-sounding recipes can quickly turn to dreck. Jon and Vinny found this out while concocting a watermelon gazpacho for Delta’s summer menu. “It seemed like it could be really delicious, especially on a 110-degree day,” says Jon. “You’re getting on the plane, it could feel refreshing. We made it. The day we made it, it was absolutely delicious. We bagged it, let it sit for three days, and came back three days later.”

It was disgusting. And the only way around this science experiment is trial and error. 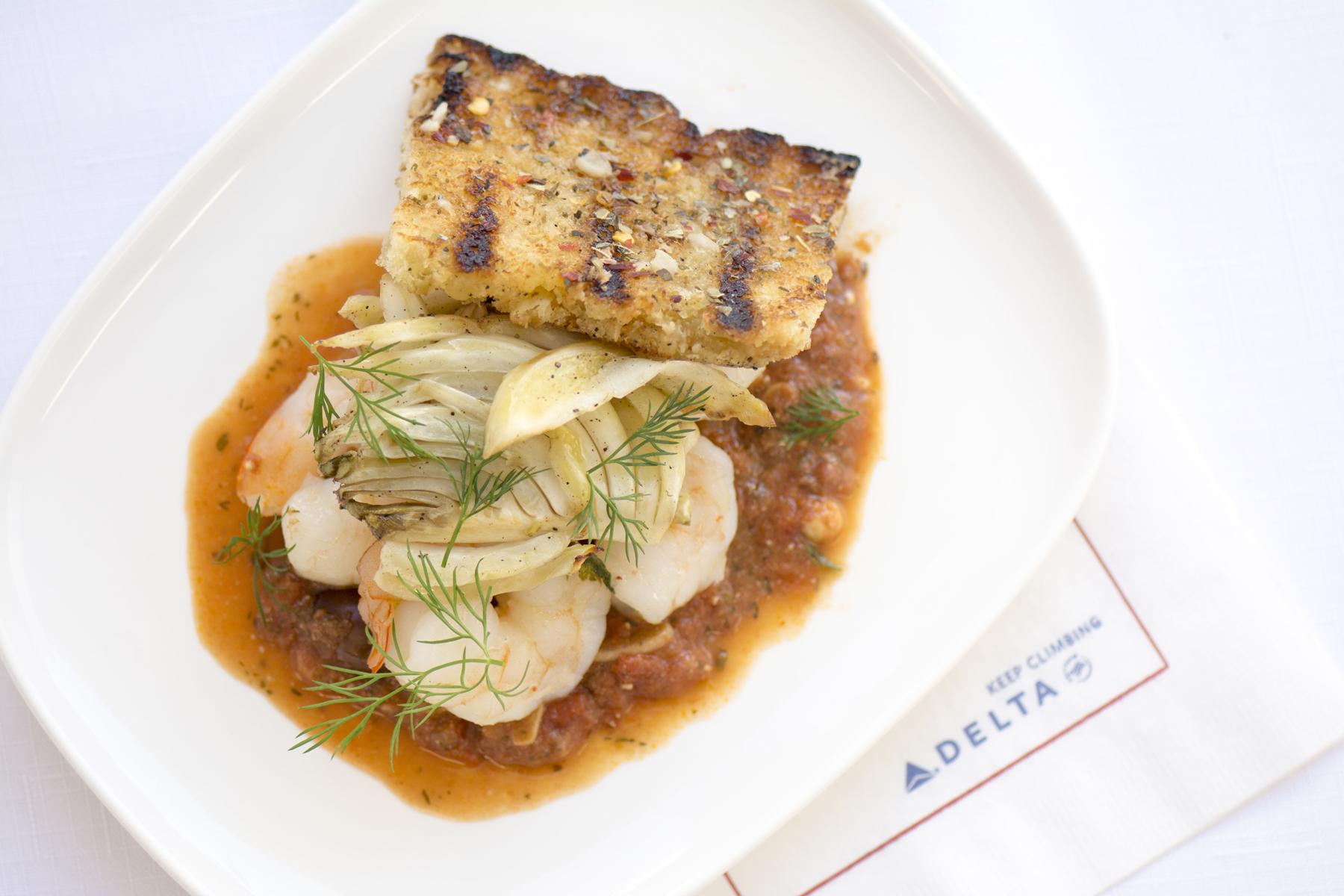 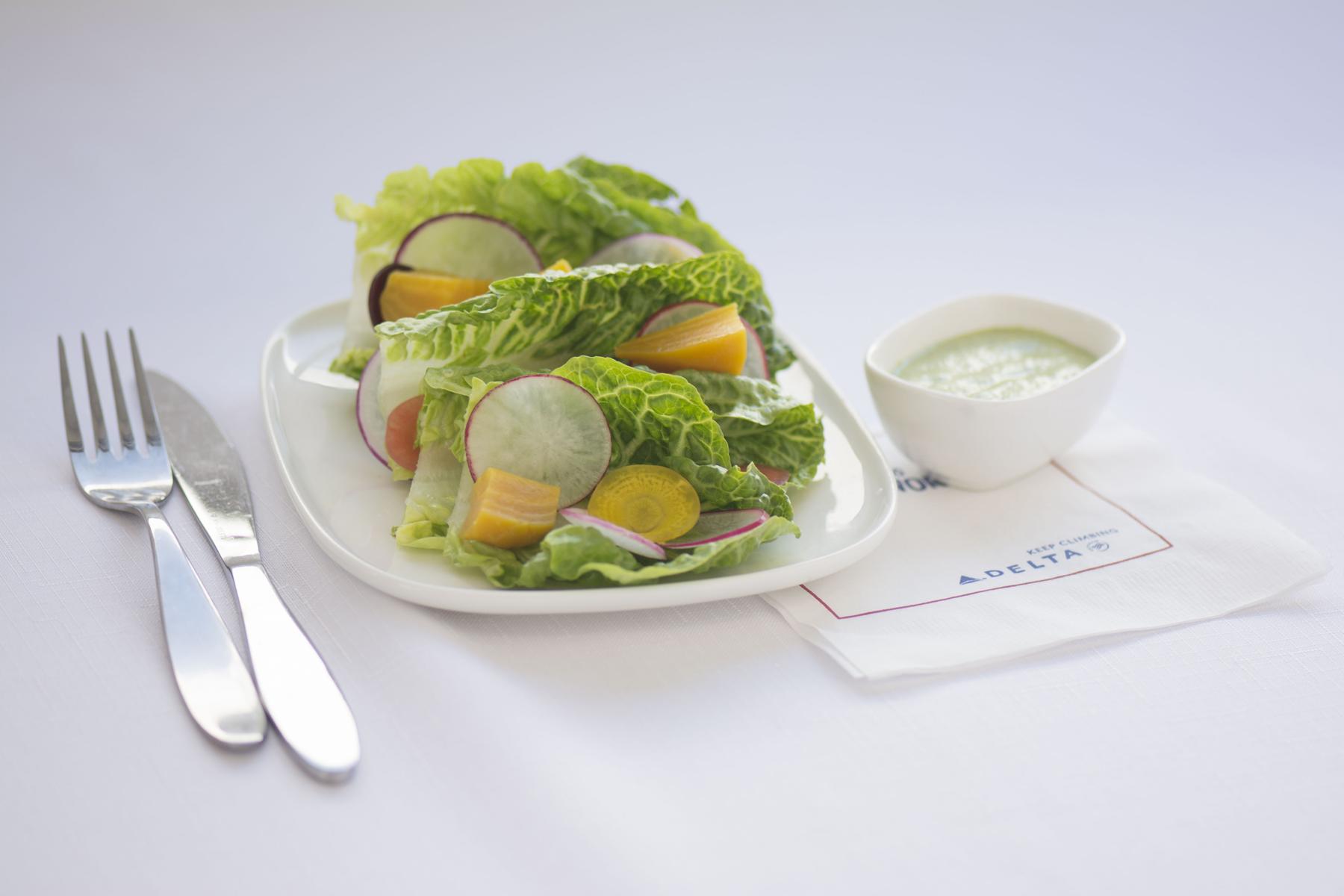 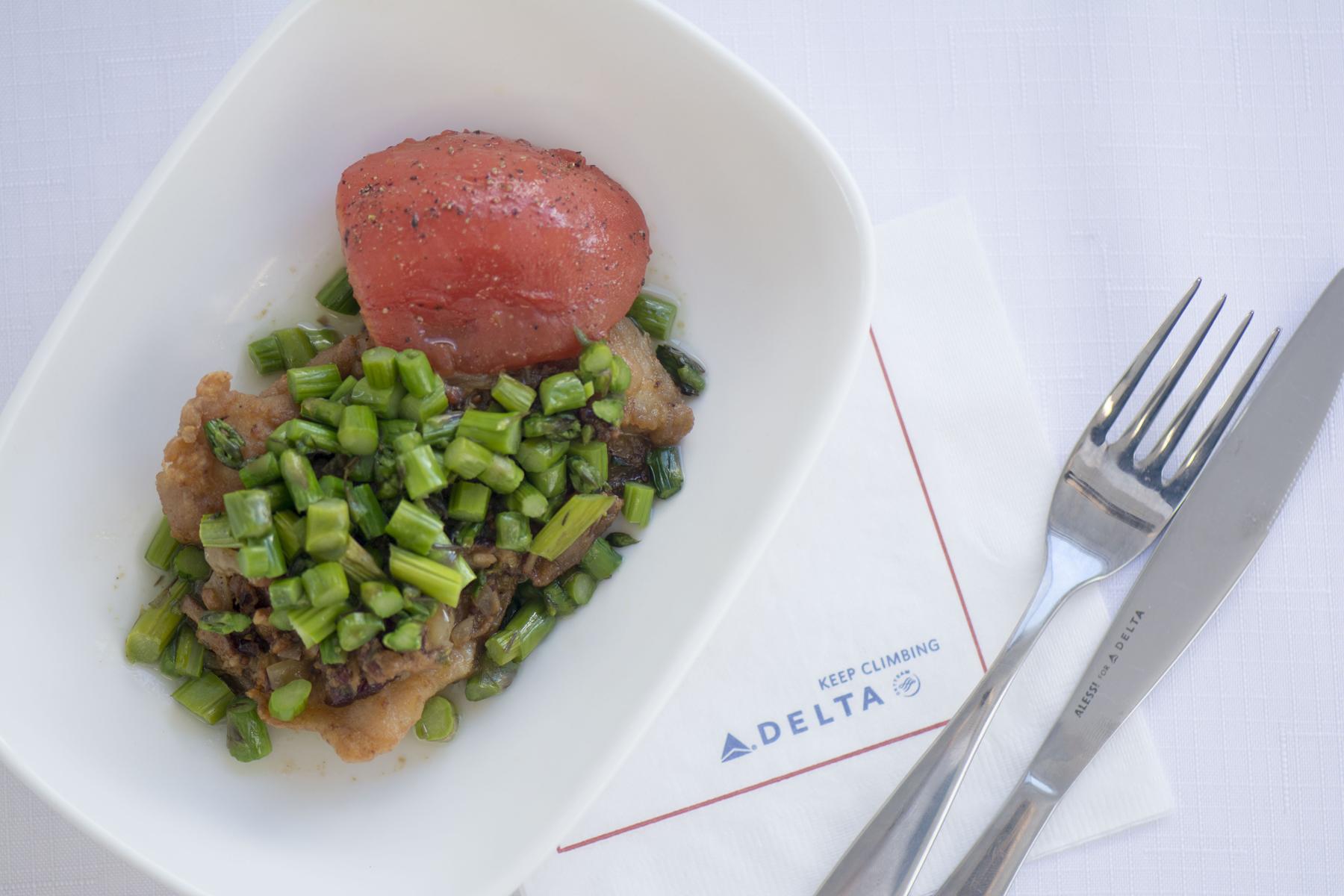 But How Does the Delta Food Taste?

At the end of the day, this is the only question that really matters: how does it taste? Yes, Jon and Vinny have had to jump through perilous hoops, but so do countless other airline chefs—but have they succeeded where so many have failed?

I did two taste tests to find out.

Taste Test 1: On the Ground

If it’s disgusting on the ground, it sure the hell won’t taste any better in the sky. So I drove over to Animal Restaurant for lunch. The usual offal-heavy menu (veal brains, pig ears, sweetbreads—all of which are gorgeously delicious, by the way) was cast aside. Rather, I’d be eating much less daring fare: a gem lettuce salad with radish, beets, carrots, and green goddess dressing; braised flank steak with spring onions and roasted boniato sweet potatoes; and vanilla ice cream. However, this meal had been prepared by following the dreaded process—yes, it had been heated, cooled, packed, and reheated in a convection oven.

And the verdict? Surprisingly good. It certainly tasted as though it were restaurant quality. Paired as it was with a Vouvray, it went down rather nicely. Now, was it as good as Jon and Vinny can be when left to their own culinary devices? Certainly not, but it’s a fine example that the dreaded process needn’t be the death knell to quality food. Rather, it’s like a quickfire challenge on Top Chef. Incredible chefs can’t be expected to do their very best work when constrained by peculiar limitations unnatural to the regular workings of a kitchen.

But it’s a testament to the fact that we needn’t eat garbage in the sky. Airlines can do better if they actually want to (and if they hire a couple of bona fide James Beard-winning chefs). 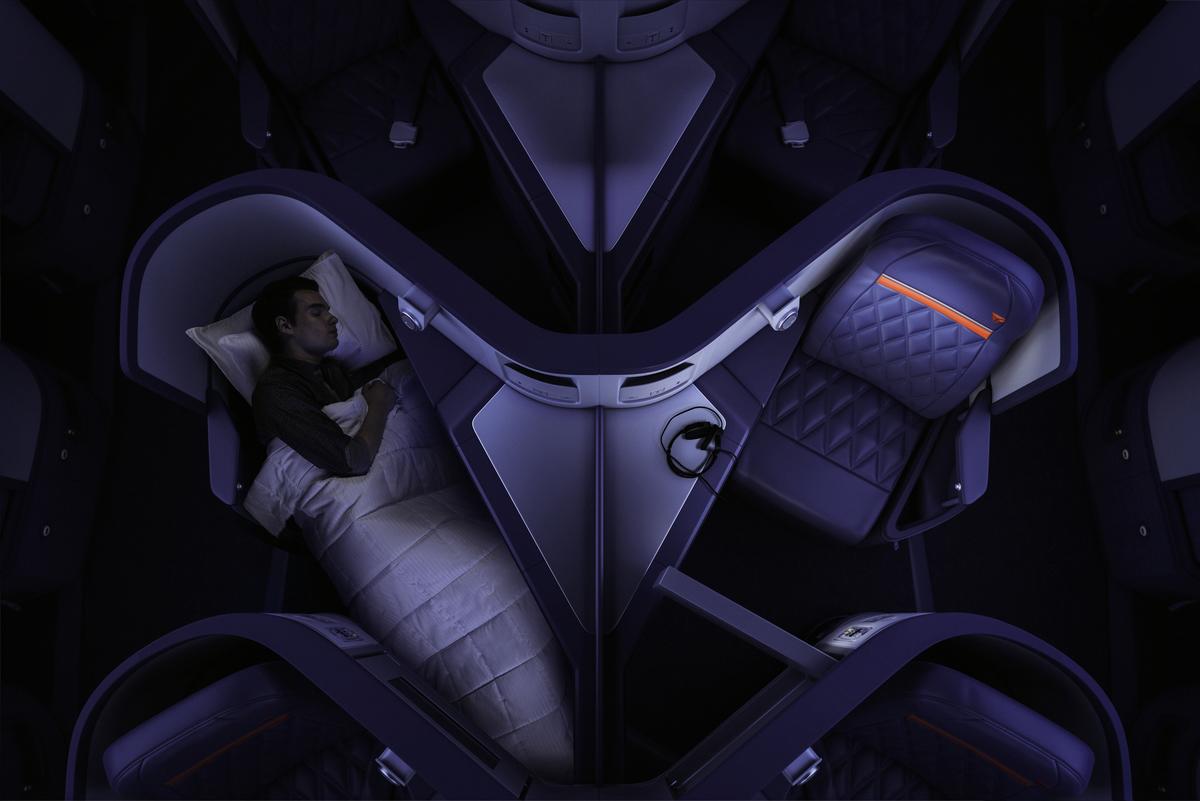 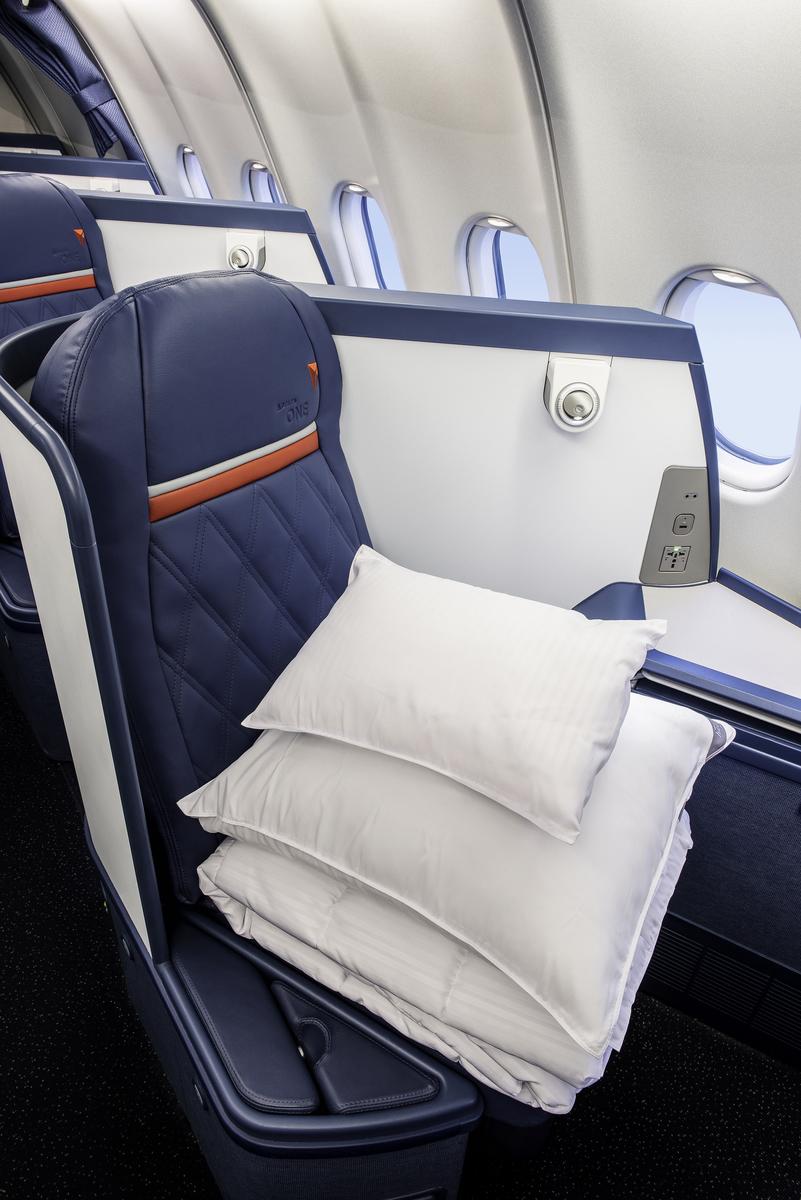 Taste Test 2: In the Sky

Jon and Vinny’s cheffery was impressive on the ground, but could it withstand the harsh environment of the plane? After all, the other peril of dining 35,000 miles up in the heavens is you. Or, more accurately, your ability to taste, which is greatly compromised when you’re in a pressurized environment hurdling through the clouds. For instance, your taste buds’ reactions to salt and sweetness are reduced by 30 percent.

I arrived at LAX to check-in to a Delta One flight to JFK. Idiotically, I stood in line rather than going to the dedicated check-in counter, where I would have been offered a beverage and light snacks. After security, I hung out in the lounge. Flying frightens me so, even though it was 9:30 in the morning, I drank gin. Then, I dashed over to the gate, cut in front of everyone else (I’m Delta One!) and took my (very large, lie-flat) seat. I was given more gin.

Ginned up, I ate.

It was good. Actually, it was better in the sky. Yes, I’d knocked back a few, but really, who doesn’t on a flight? This was not a simulated experience, but actual, live-in-the-field practice. The menu was different than the one I’d tried at Animal: grilled chicken on a salad (the same salad as I’d already eaten). Chicken, of course, is a staple of sky-food—usually served dry or chewy, too hot or too cold, slathered in brown or red gravy, and always, always, always vile. But not this time. Rather, it was moist, well-seasoned, perfectly cooked. The salad was crisp and properly dressed—even refreshing.

I was oddly happy. Even the boredom-inducing Darkest Hour, which I unwisely chose to watch while funneling food into my belly, didn’t darken my appetite. I wanted more!

It’s not just any cookie. This isn’t some pathetic dusty Nabisco wafer or a chalky Keebler-built monstrosity. This is an amazing cookie. If I could use obscenities within these sentences to describe this cookie, I would. This was a cookie that was so good, my vocabulary failed me. Polite words refused to appear in my brain. This is how good this cookie was—a White Chocolate Miso Cookie. And it’s the best expletive cookie that has ever been served on a plane.

Is It Worth It?

First of all, if you can swing it—with points, an upgrade, or cold hard cash—business class is always, always, ALWAYS worth it. Too often air travel can feel like Snowpiercer—and it’s better to be a Tilda Swinton in the front than a John Hurt in the back. And just as business class is always worth it, so too is a good meal. I would do anything, I would pay anything for a good meal. And a good meal in business class when so many other airlines are forcing you to suffer through Dickensian slop and tomatoes doused in ethylene? God, yes! And a good meal in the sky that comes with the best expletive cookie you’ll ever eat? It’s the sort of thing that makes you want that five-hour Delta flight to last five hours longer.

This Small City Makes Booze You’ve Never Even Heard Of

Send To A Friend