Say what you will about the rest of 2018, but there’s never been a better time to be a foodie. Anthony Bourdain has uncovered just about all of the Parts Unknown, and even between foodie travel trips to find Tokyo’s 10 Best Bowls of Ramen, you can find plenty of authentic soup back home, even in small towns. That’s because, more than ever, living in the first world means that the planet’s best food comes to you. And if you’ve also spent your Saturday morning browsing exotic varieties of apples at Whole Foods then you can count yourself as the proud owner of food privilege. And here to help you check it is a new travel show, Food Exposed. 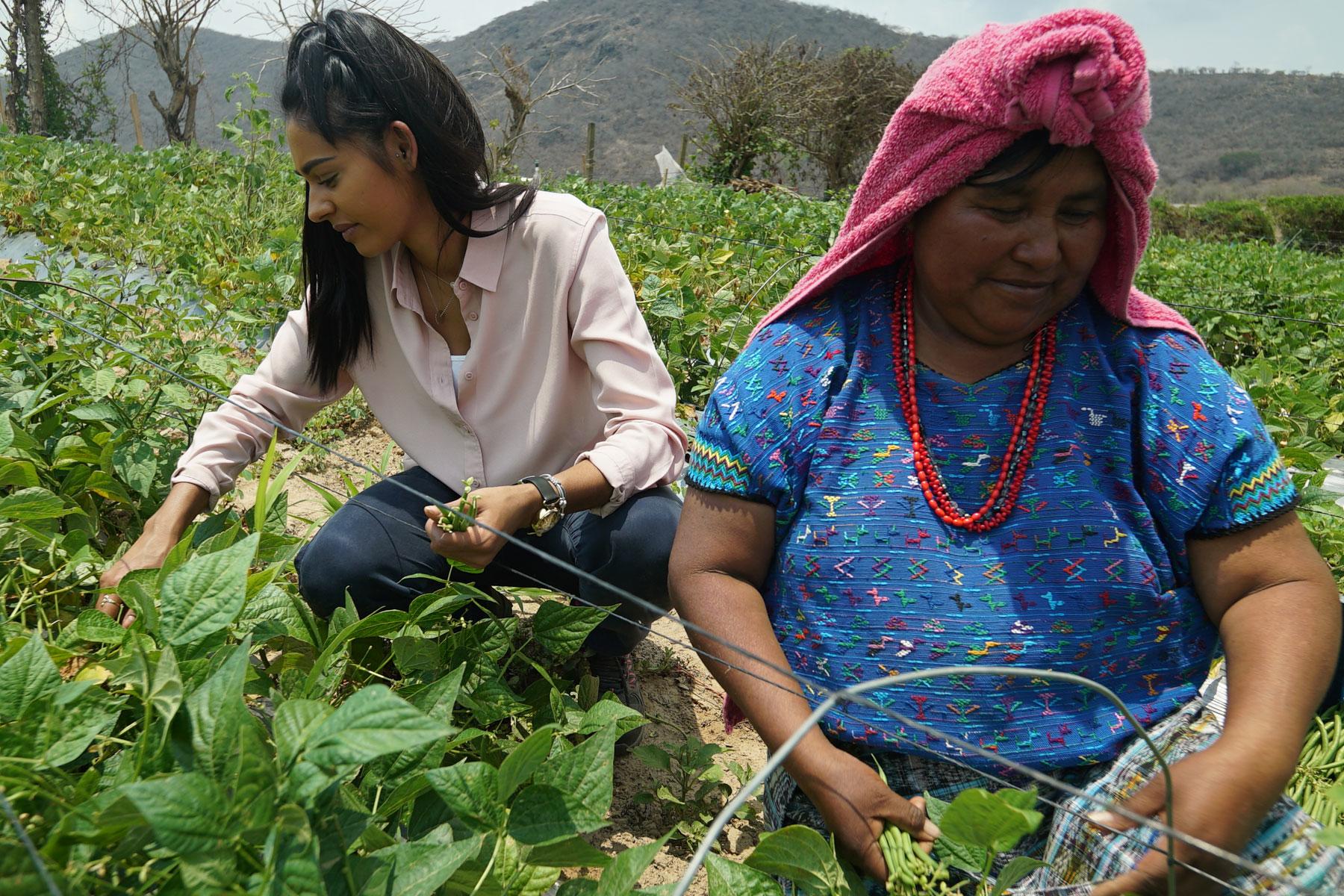 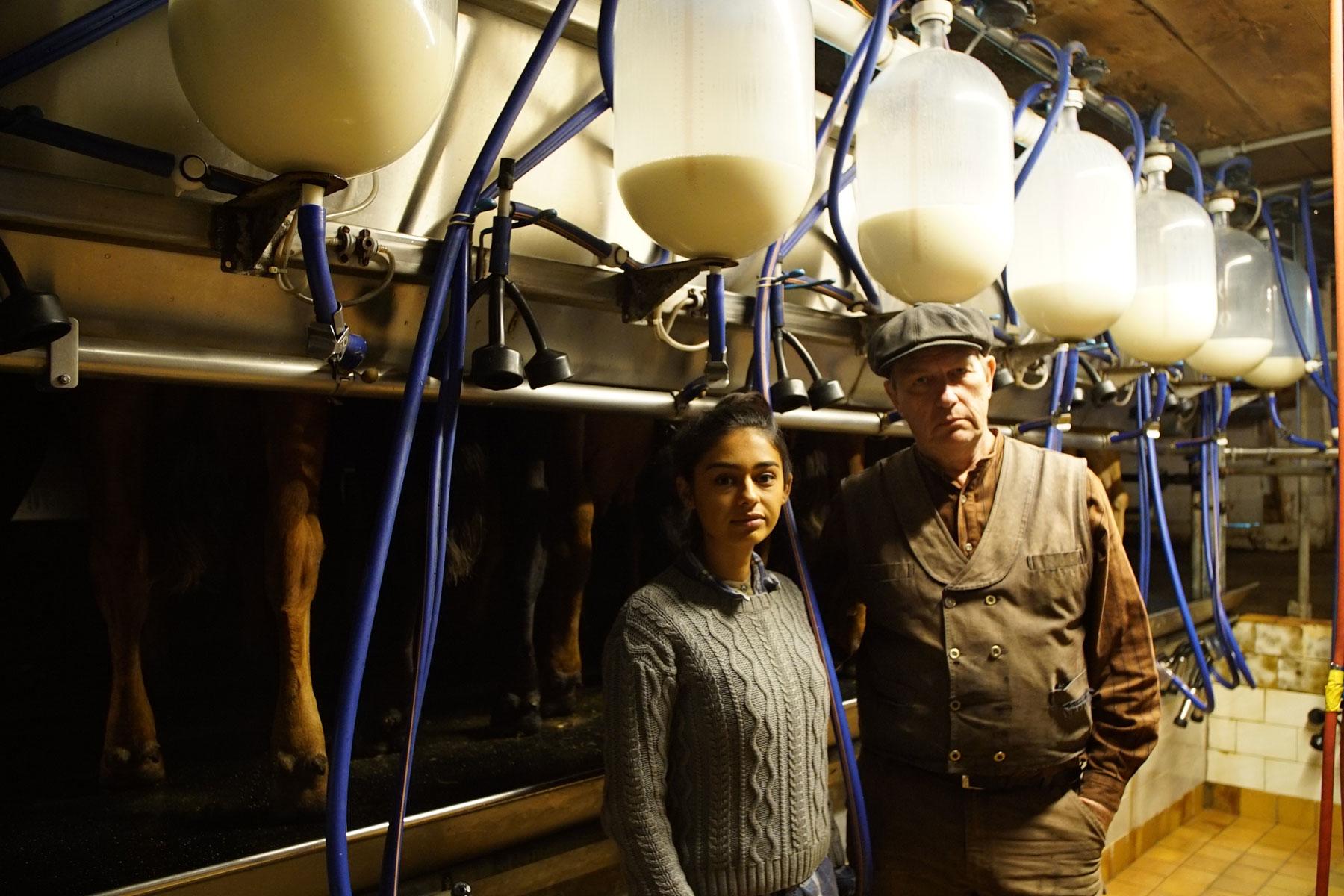 Hosted by Nelufar Hedayat, award-winning journalist of Fusion fame, this eight-part docu-series adventures around the world to see just what negative effects our food-on-demand privilege has on the rest of the world, and tackles questions that most of us never think about: like what happens to the world’s oceans when sushi is trending for millions of people at the same time.

What happens to the world’s oceans when sushi is trending for millions of people at the same time?

The show tackles that very question in episode two which finds Hedayat speeding across the Gulf of Guinea on the hunt for illegal fishermen piloting trawlers: giant commercial fishing ships that cast massive nets —some as large as 18 miles wide—and drag them across the ocean to snatch up all of the marine life that they can. They keep the fish that they can sell. The rest—rays, sea urchins, and other sea life—gets tossed back out to sea, often after it dies on deck. It’s a fishing method that, when unregulated, can devastate fish populations.

“There’s predictions that we’ll have an empty ocean by 2050,” marine specialist Sonya Hyppänen tells Hedayat as they spot a trawler on the horizon. Many of them have come from seas that are so overfished that there’s little left to catch. Now that they’ve moved on to the Gulf of Guinea, its fish population is dangerously low, and West Africa is now losing more than 40% of its catch–nearly a billion dollars each year–to theft.

Onshore, Hedayat finds that local fishermen’s nets are coming up empty, robbing them of a way to make a living that they’ve enjoyed for hundreds of years. They are now forced to buy their fish back from the trawlers, often on credit, at ruinous prices that keep them in poverty. 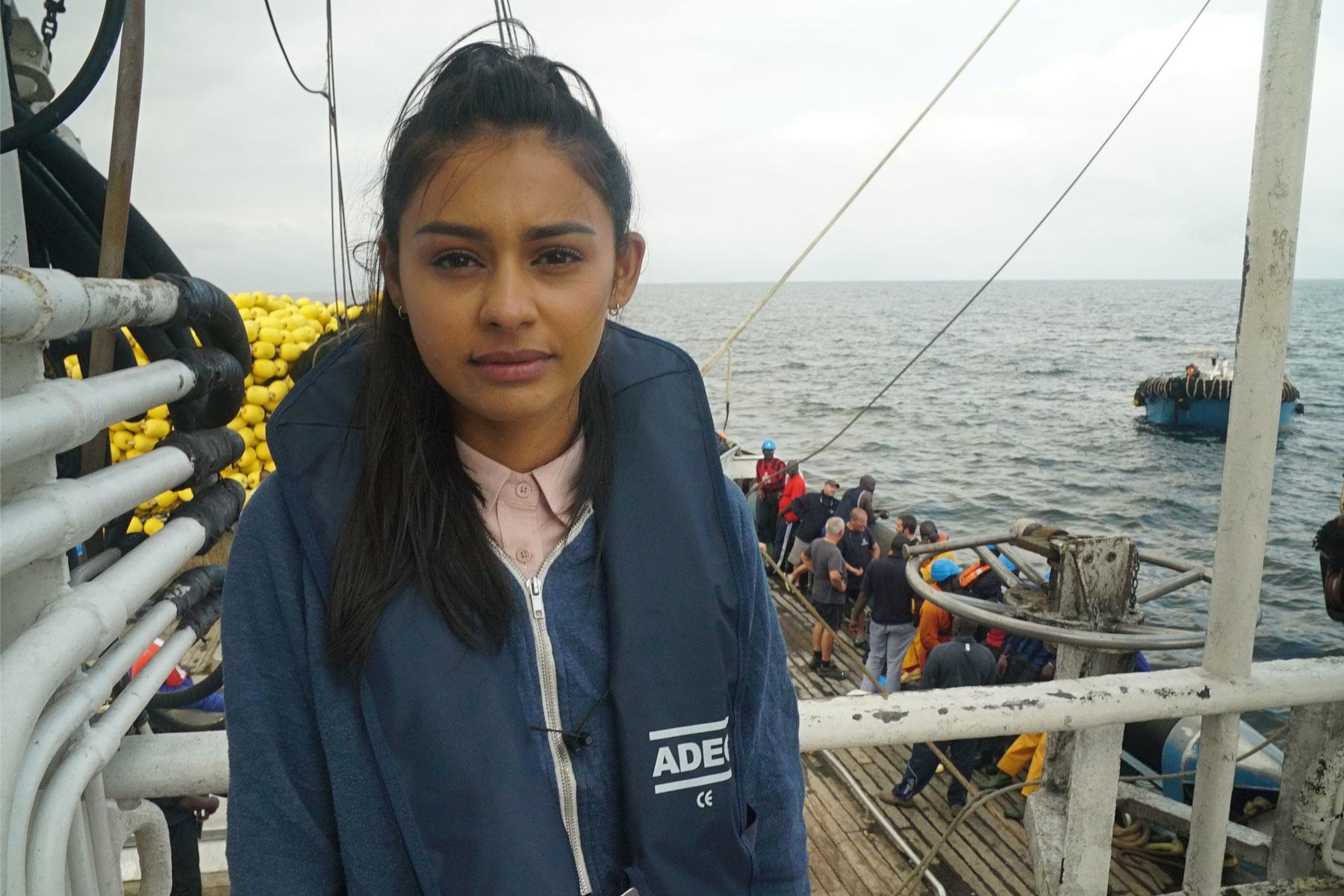 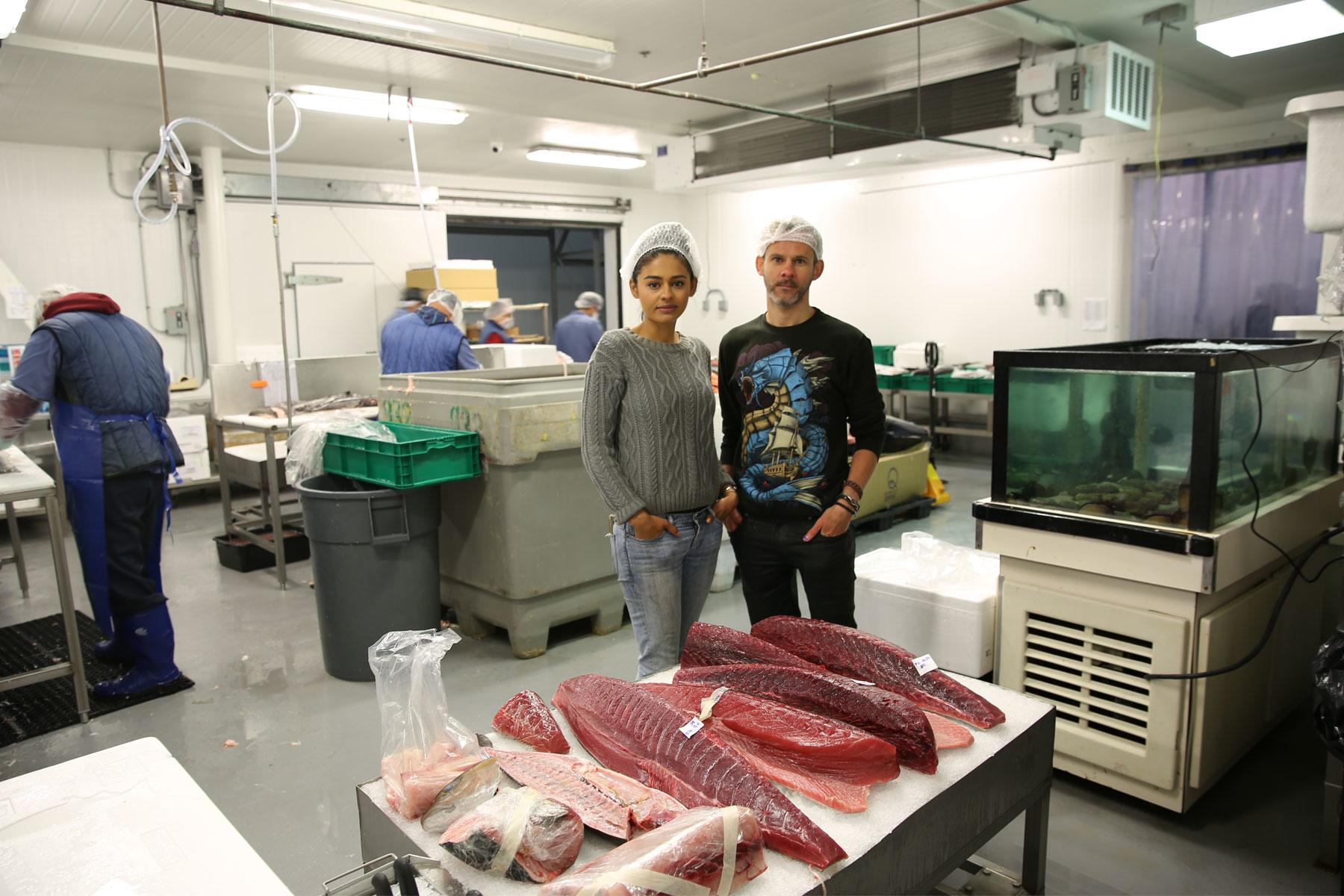 “In the name of Jesus we are suffering,” a fisherman tells her quietly, as his son wipes away tears.

It’s an upsetting story. It’s all in the name of feeding our global demand for fish. “We eat 140 million tons of fish a year, roughly twice the amount we ate 50 years ago. And as that number keeps growing, we’re fishing 2.5 times more fish than the seas can contain,” Nel explains in voiceover.

They are alarming numbers and upsetting scenes that make those of us who thought that we were relatively food-woke wonder why we haven’t heard or seen them before.

The short answer? Because Hedayat and the Food Exposed crew go boldly where few journalists have gone before: chasing poachers across the high seas, trekking 175,000 miles through the wilderness, foraging through the garbage with freegans, whatever it takes to get the message out there.

“Some of the things we wanted to investigate and look into are so remote and so under-reported that there was nothing to do but pack a bag and head out,” Nel tells Fodor’s via email.

“We’re fishing 2.5 times more fish than the seas can contain.”

“Take the amazing people I met in Sinoe county in Liberia and the thirteen-hour head-splitting car ride to get there. I would never have met and learned about the tradition of wild palm oil cultivation with the rambunctious Stanley nor have documented unscrupulous foreign palm oil companies clearing land without proper consultation of the locals on disputed land. We had to be there to capture it and show that these locals are right in their grievances.”

It’s all in the name of getting first-world foodies woke to the hidden social, economic, and environmental costs of some of the foods we take for granted. And it’s pretty effective. We’ve seen the episode synopses—infected dairy cows, ranchers driven out of work by factory farms, entire cities living off of the garbage we create with food waste—and frankly, we’re afraid to eat anything ever again.

Thankfully, Nel was willing to sit down with Fodor’s and give us a few tips on how to eat around the world—without ruining it.

The Best Way to Check Your Food Privilege When You Travel

“I’m sorry in advance,” e-mailed Nel, when we asked what, in her opinion, was the best, least-problematic way to eat while you’re traveling. “There’s no really delicate way to put this to you guys so I’m just going to go ahead and say it. Be plant-based or a flexitarian if you can. This is the best way to help yourself, the people and planet around you.”

Flexitarian, explains Nel, is when you don’t eat meat or fish or dairy when it’s unclear whether your Branzino was stolen from a small fisherman in Africa, or if your milk was taken from infected cows (just wait until you check out episode three). Basically, if it has parents and no one can tell you where they’re from, or a language barrier is keeping you from asking, don’t eat it.

But what if the idea of traveling without eating meat or fish does not compute? Then, says Nel, you have to be choosier about where you eat if you don’t want to change what you eat.

“You can be a really responsible consumer in most places in the world…It depends on the type of travel you’re doing, your access to the local communities, and mostly, how determined you are.”

Most food-woke travelers do it with farm-to-table travel. A sub-section of foodie travel, farm-to-table travel is a new way to experience what’s local about a destination by tasting it on your plate. Sonoma Valley, for instance, a region that’s been known for the terroir of its wines, is now a foodie destination that embraces local flavors that are as rich and varied as the local reds. Restaurants–The Girl and the Fig and El Dorado Kitchen are must-tries–are proud to let you know where all of their products come from, often within a 100-mile radius and proudly labeled right on the menu and few enough in number that you’ll know them by name after a few meals.

“You have to be choosier about where you eat if you don’t want to change what you eat.”

And locally-sourced flavors are in vogue all over the world, no matter how far afield you fly. There is, it’s worth mentioning, an exclusive island in Fiji whose five restaurants get 85% of their food from the island. That includes not only coconuts and 40 kinds of fruits and vegetables (and coffee and tea), but wagyu cows, wild goats, and lobsters caught right off of the shore.

Which is to say that it’s easy to adjust your travel plans and minimize the guilt you’ll feel when you know that your food privilege comes with a price. “We have to think harder,” says Nel, “about what we are willing to pay (and I don’t mean in dollars, calories, or points) for the food we eat.” And if you want to think really hard, Nel wants you to know that flexitarianism is always on the table.

“Try cutting out meat and dairy once a week from your diet completely. Try and shop locally and if not locally, try to buy from smaller shops that can’t afford to waste food. Most importantly–Google and find out more. Arm yourself with knowledge! Happy hunter-gathering, folks.”

No matter what your dietary plans are, be sure to check out the rest of the season of Food Exposed to discover more hidden truths about the food industry.

What’s the Best City for a Foodie Vacation? We Asked a Celebrity Chef

Where to Find an Authentic African Market in Manhattan

Send To A Friend